You are using an outdated browser. Please upgrade your browser to improve your experience and security.

Asparagopsis is a naturally occurring red seaweed native to the Western Australian Coast.

CSIRO researchers found that when this seaweed is added to cattle feed it significantly neutralises the methane produced in the animals stomachs.  In fact, a trial found that when a cow’s diet contains just 0.2% Asparagopsis, methane generation is reduced by 98%. 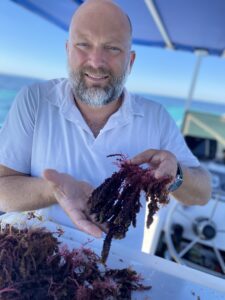 In addition to reducing methane emissions from Asparagopsis feed supplement, a potential of 20% growth rate enhancement during 90 day feeding period was found as methane generation for the animal is energy intensive.

It is an active chemical found in Asparagopsis Spp, and believed to be the primary cause of methane reduction in the ruminant animal’s stomach working alongside 120 other bioactive compounds found in the seaweed.

There are two species high in natural bromoform that SeaStock is targeting for cultivation and production, the species have a preference for certain climatic regions allowing for growth across the entire pristine West Australian coastline:

Asparagopsis has the potential to generate carbon credits from methane reduction.